Sycamore is an architecture and interior design practice specializing in residential and commercial sectors. Our aim is to provide inspiration to conceive a project and care to deliver it.

Raniero Botti is the founder and CEO of Sycamore. He is a IT registered Architect having graduated from La Sapieza School of Architecture with commendation. 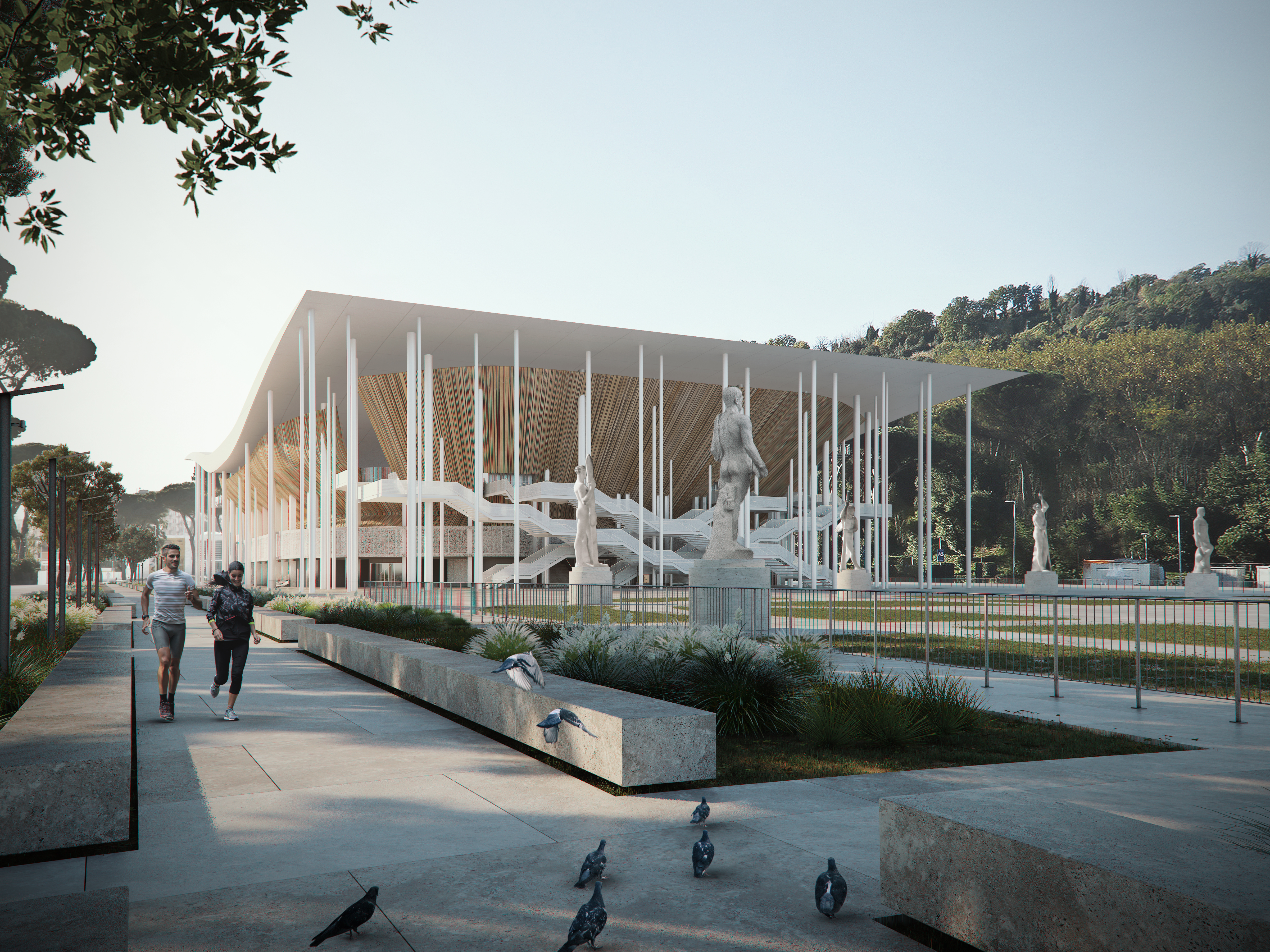 The proposed project remodels the grandstands, following the increase in capacity to 12,000 seats. The new roof, with all the pillars and emergency stairs, as well as connoting the new architectural aspect of the Central Tennis Stadium, are part of the park project. Through the adjustment of the escape routes, the relationship of the ground attack between the stadium and the park itself has been changed. 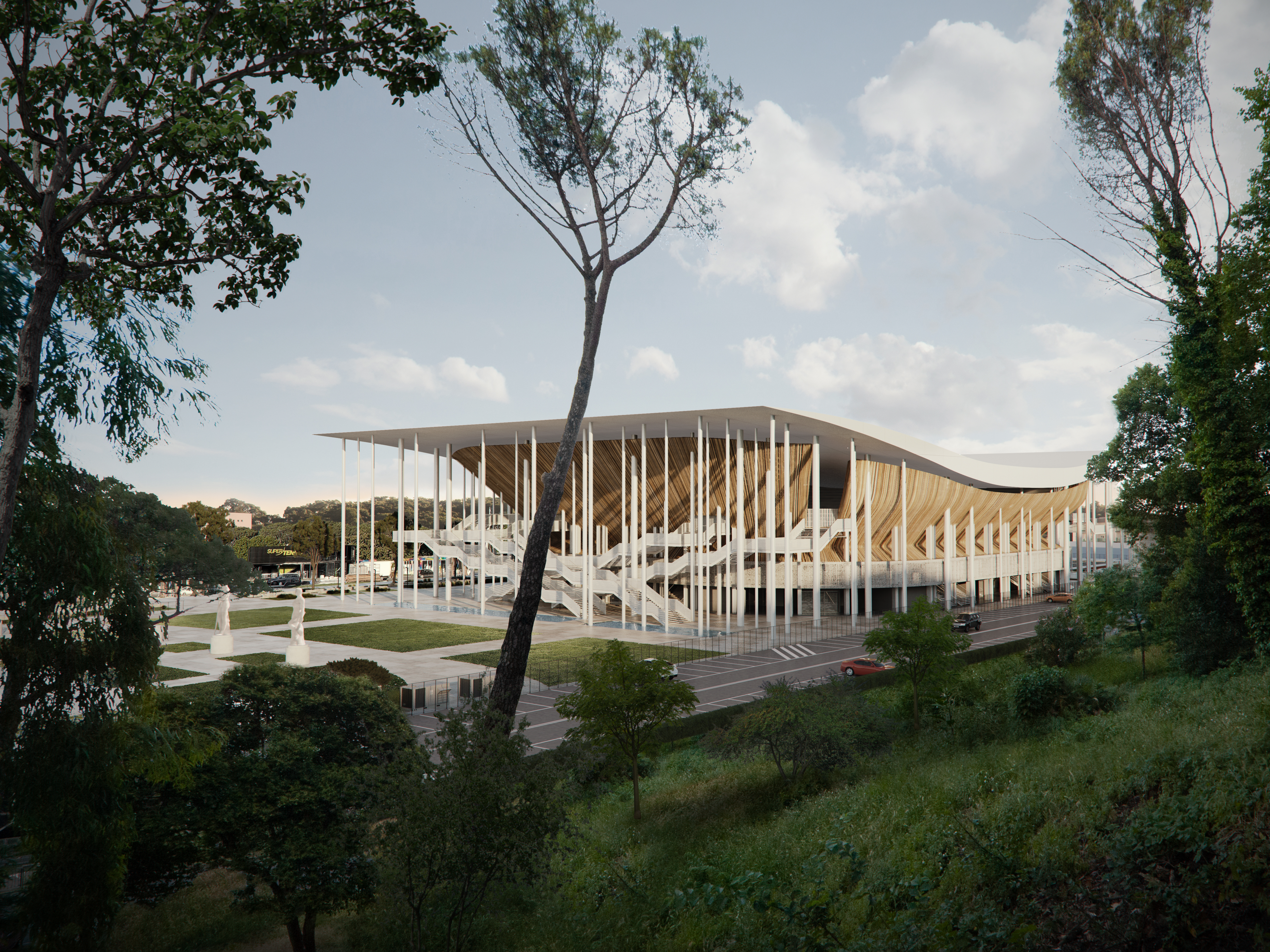 The design idea aims to enhance the regulatory constraints, converting the presence of a greater number of emergency stairs and escape routes into architectural elements. The escape routes and stairs, architectural elements very present in the general composition, are proposed through two different solutions; one for the north grandstand and one for the south grandstand.

In the part of the nord grandstand, the design composition of the stairs defines an apparently casual backdrop, characterizing the façade with a harmonious movement created by the ramps of the different stairs, always in compliance with the current safety regulations. When the stairs reach the ground floor, they participate in the redesign of the park, all under the roof that goes beyond the limit of the stadium, covering the entire system of new vertical connections. 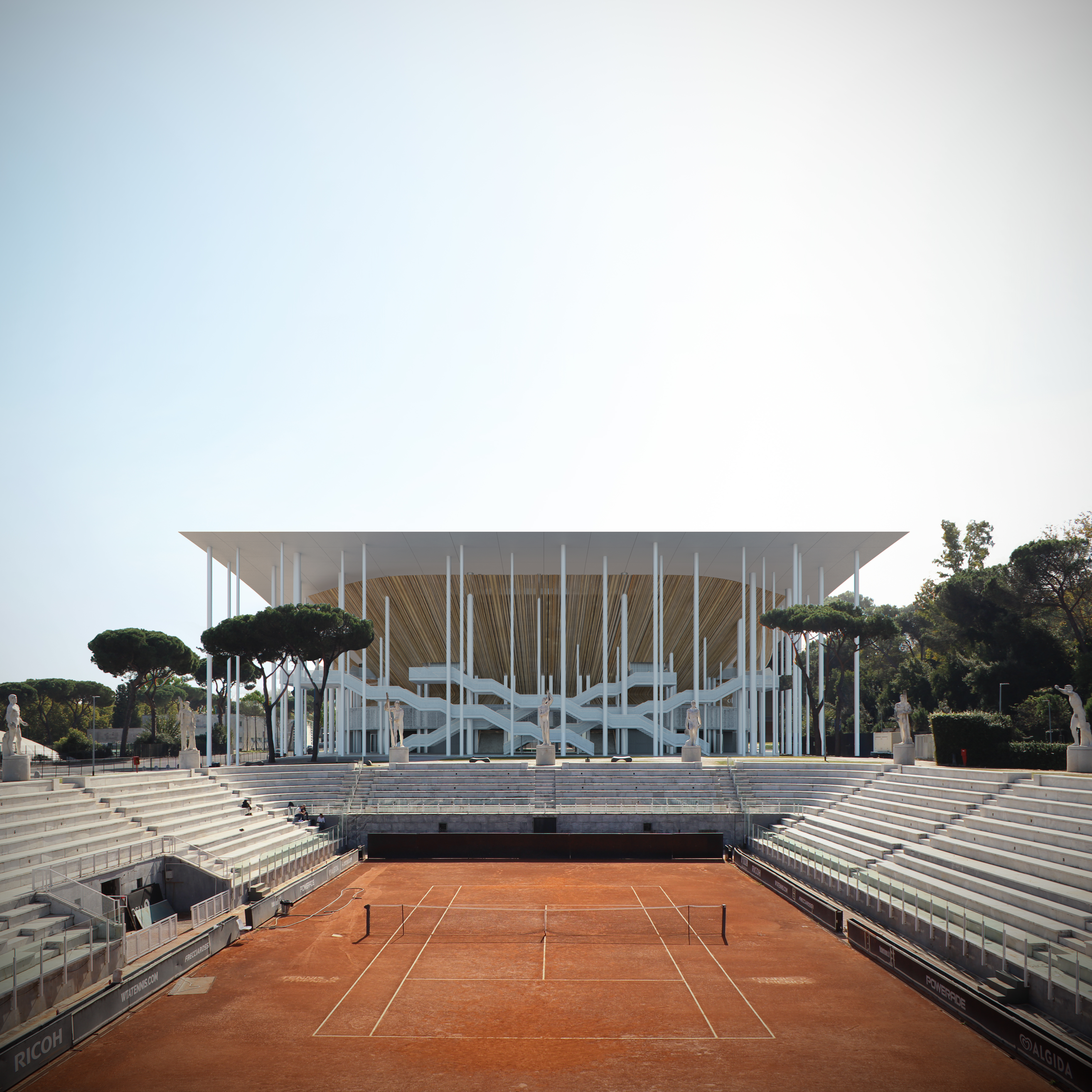 The solution for the south grandstand is different. Here, in fact, the new stairs, which lead from the new emergency exits to an altitude of 10.95 m. They arrive at the level of the first floor, where the surface is remodelled and enlarged, demolishing all existing volume to deal with the new dimension of the emergency exits. From here a large staircase reaches the ground floor. 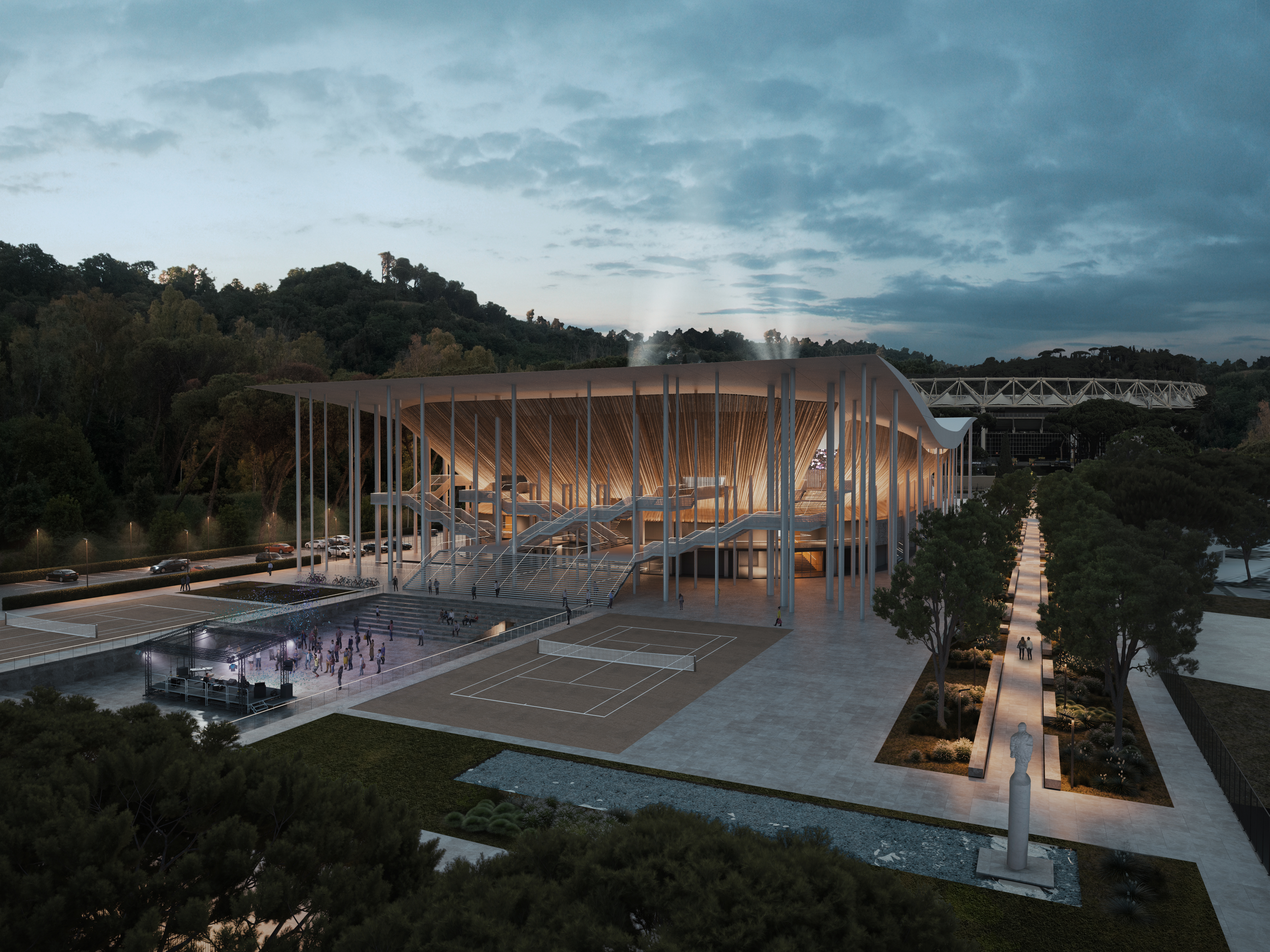 In this area, the new rectangular outdoor amphitheatre is the result of a combination between functionality and activities related to leisure, artistic and musical performances when the stadium does not host tournaments. The large staircase that will allow the public to flow out of the stadium when it is in operation, will be used as a grandstand for participation in the events to be held in the outdoor amphitheatre.

Genesis of the project

In its general complexity, dictated not only by the technical solutions but also by the distribution of entry and exit routs as well as activities and intended uses, the project is the result of a simple design thought, the genesis of complex elements, but deriving from an essential geometry, with its own identity and recognisability. 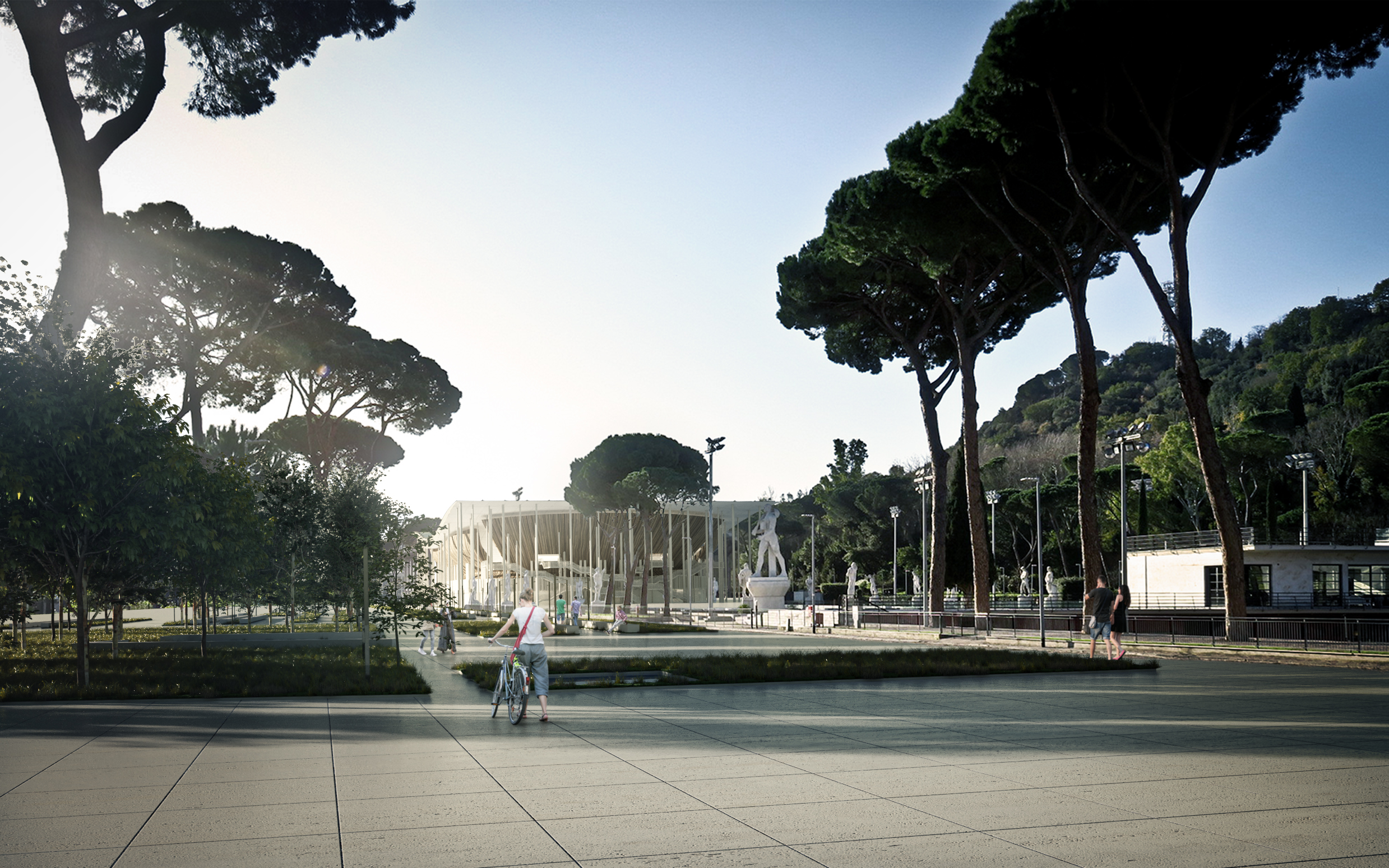 The roof, as previously mentioned, is a homogeneous surface shaped according to the grandstands of the stadium. The design idea is inspired by the lightness of a sheet of paper supported by slender linear steel elements, with an apparently casual arrangement, like the trees of a spontaneous wooded area. 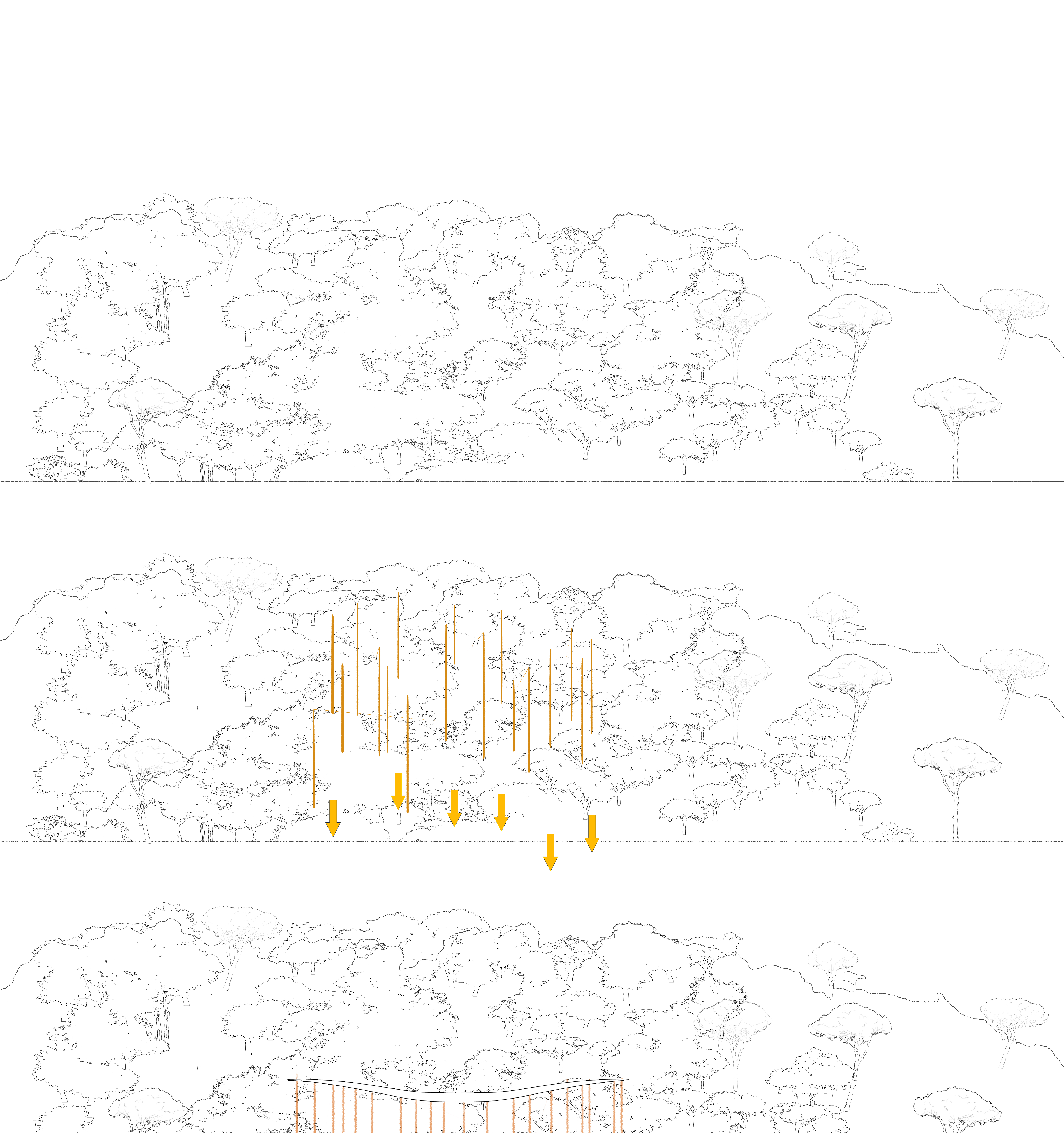 The lightness of the roof and the slenderness of the pillars define both the internal space of the stadium and the external one. In plan, the rectangular geometry of the roof follows the same geometric matrix used for the park project. An archetypal form that integrates, without disturbance, into the shapes of the sports facilities of the Foro Italico.

The main idea of the roof was not to limit it to the sole function of covering the stadium, but to extend beyond the limits of the same and include the external areas of the park to:

-cover the escape system outside the stadium,

- be an element of integration of the park project, creating open / covered areas. These large shaded areas change the microclimate in the summer, making the rest and leisure areas very liveable and comfortable. In every season these covered parts will be an added value to the usability of the park itself.

A length of 42 meters and a width of 25.60 is the size of the central void of the roof, which will then be covered with two mobile elements to ensure, in case of rain, the total coverage of the stadium.

The structural project involves the construction of a steel structure consisting of a double warp transverse and longitudinal framework of double diagonal trusses. 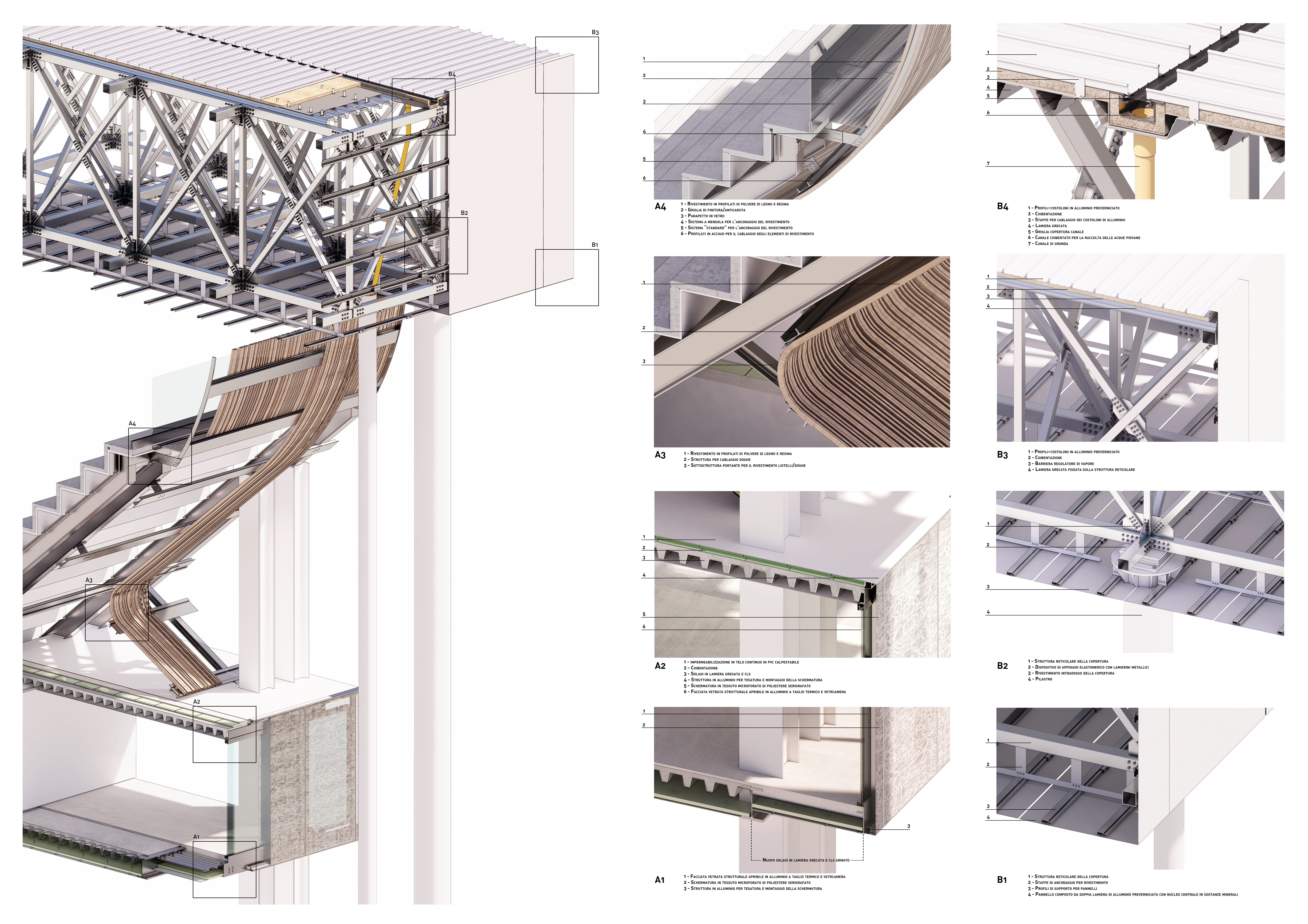 The steel pillars with a circular section, of varying dimensions, support the roof. Among the structural elements, according to the model subjected to seismic actions, some will respond to compression and others will act as tie rods in certain situations of structural behaviour, such as a sail effect under the action of the wind. 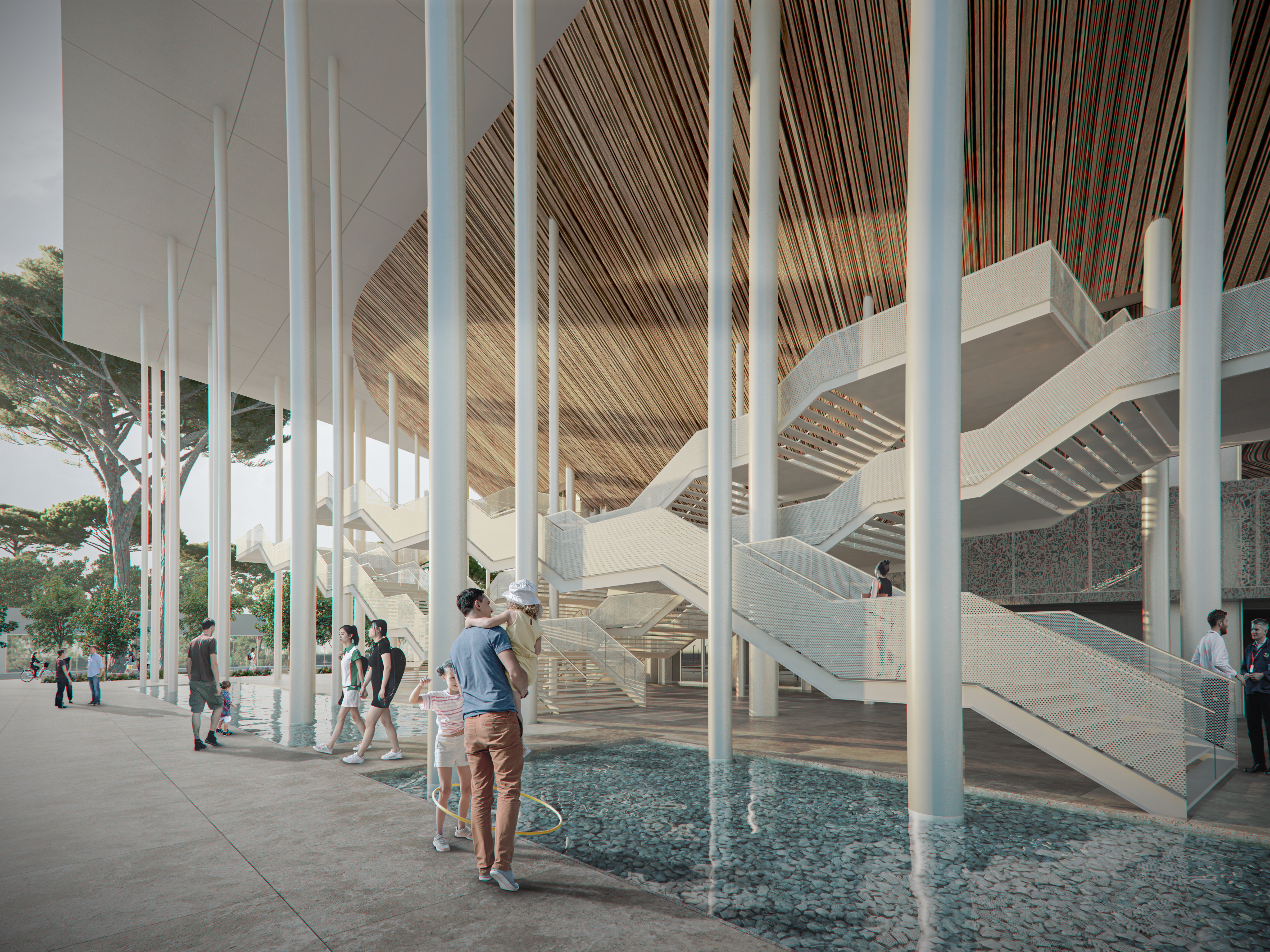 Some pillars will serve, in part, to structurally integrate the extension of the stands. All the new stairs will also be anchored to the pillars with a bracing function. The solution adopted allows us not to see bracing elements that would conflict with the idea of the free slender linear pillars. Other steel pillars, with a non-structural function, will be used as canals to serve, in part the electrical and special system, some to integrate the descendants of rainwater, then collected in storage tanks. 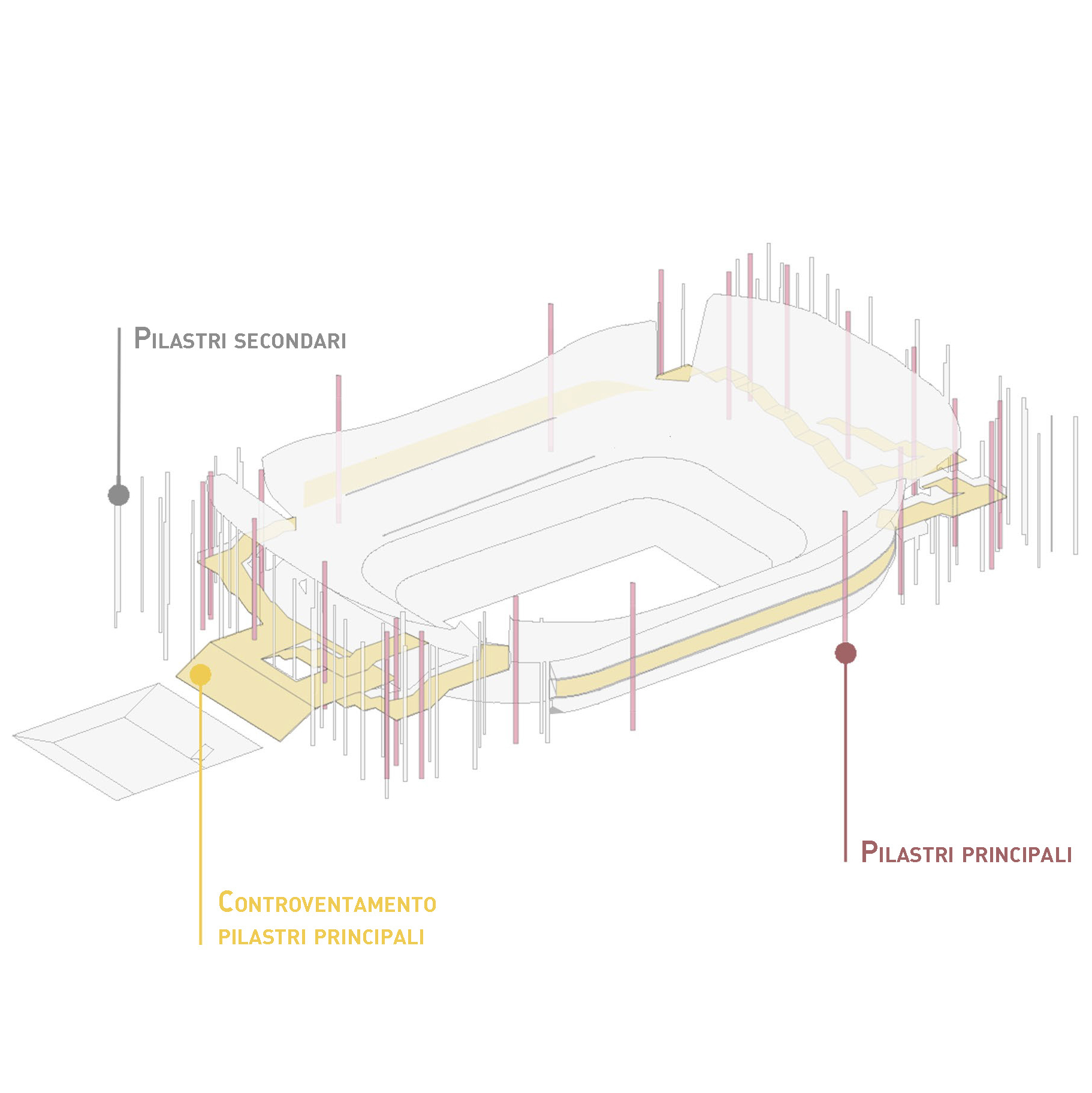 This complex system of plant and structural integration was solved by the architectural choice of the set of random vertical elements arranged under the roof, all outside the reservoir. Two compositional systems architecturally disconnected from each other. This apparently random set of elements contrasts with the large trees that surround the park of the Foro Italico and respect the randomness of a spontaneous wooded area. 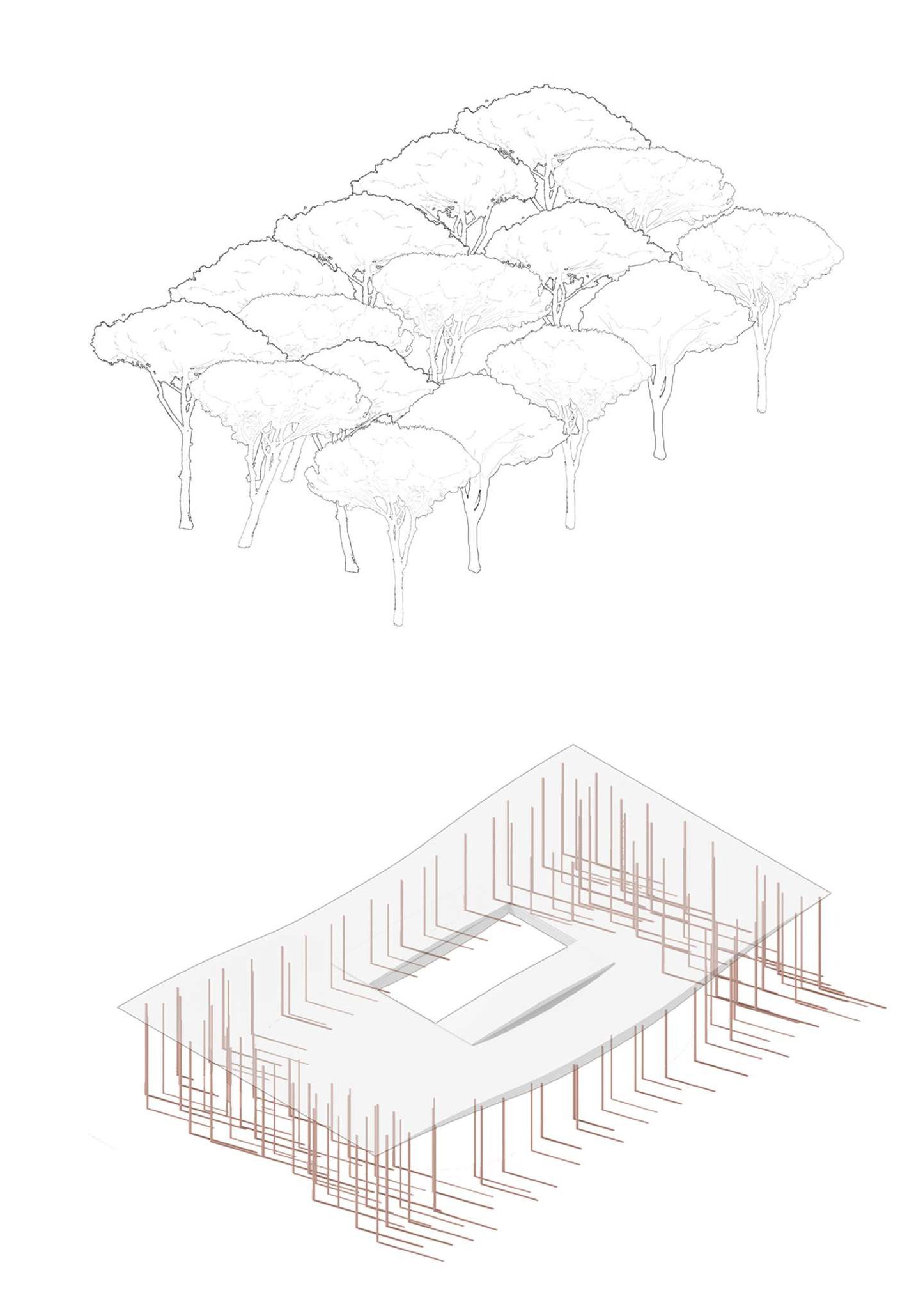 The conformation of the current stadium has been extended longitudinally for two main reasons:

-On the one hand, for requirements imposed by the competition announcement, that is not to extend the stadium towards the hill of Monte Mario and not to visually impact the Foro Italico Park.

- On the other hand, guaranteeing the new seats in the area of the two ends, which are the positions with the best visibility for a tennis stadium.

The extension structure of the stands will be the same as the existing one, prefabricated steps in prestressed reinforced concrete on steel structure with beams connected to the existing beams.

These large openings allow spectators to have vies towards the park, the Monte Mario hill and the city skyline, as shown in the diagrams. 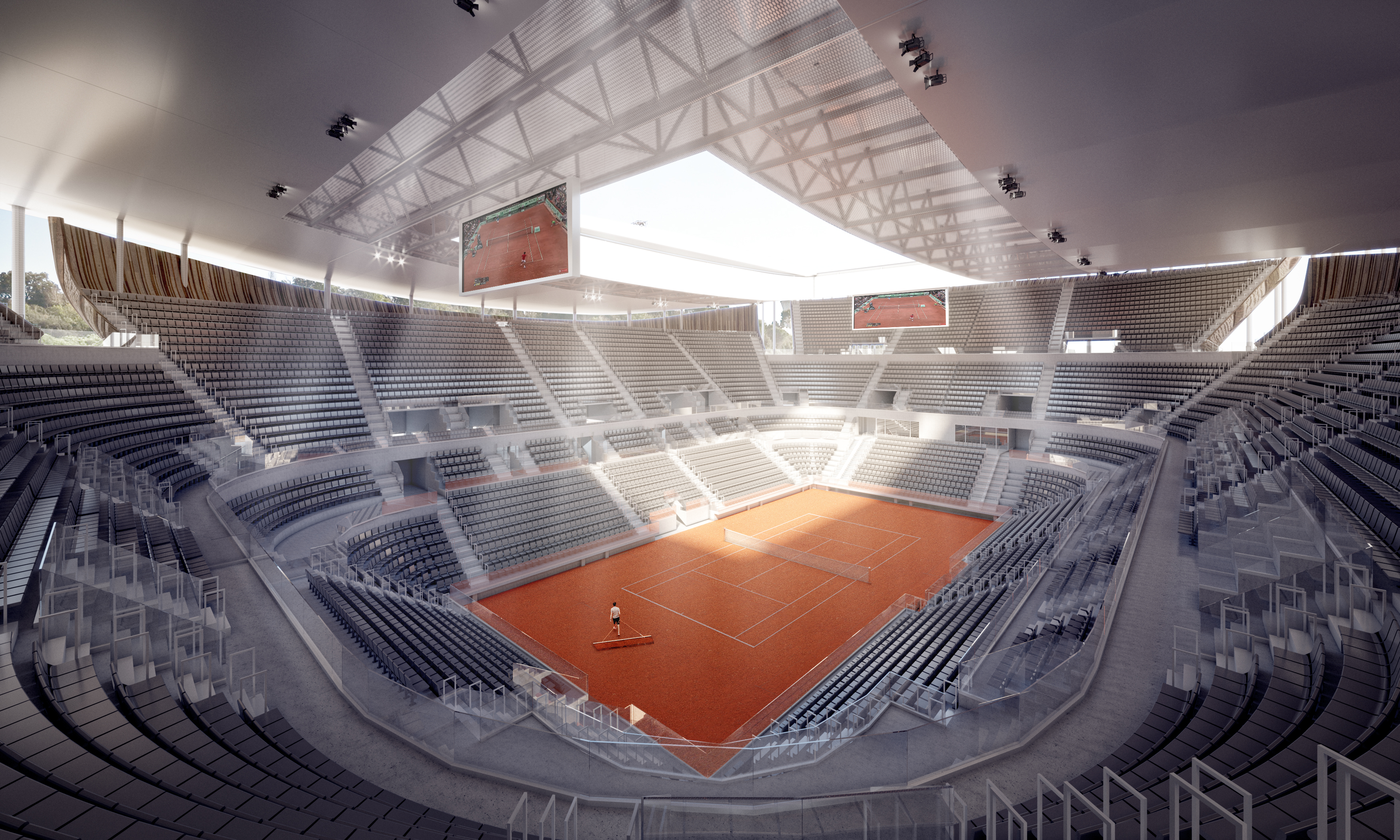 The openings on the 4 sides of the stadium offer a perception of the place, enhancing the structure itself and its recognisability. 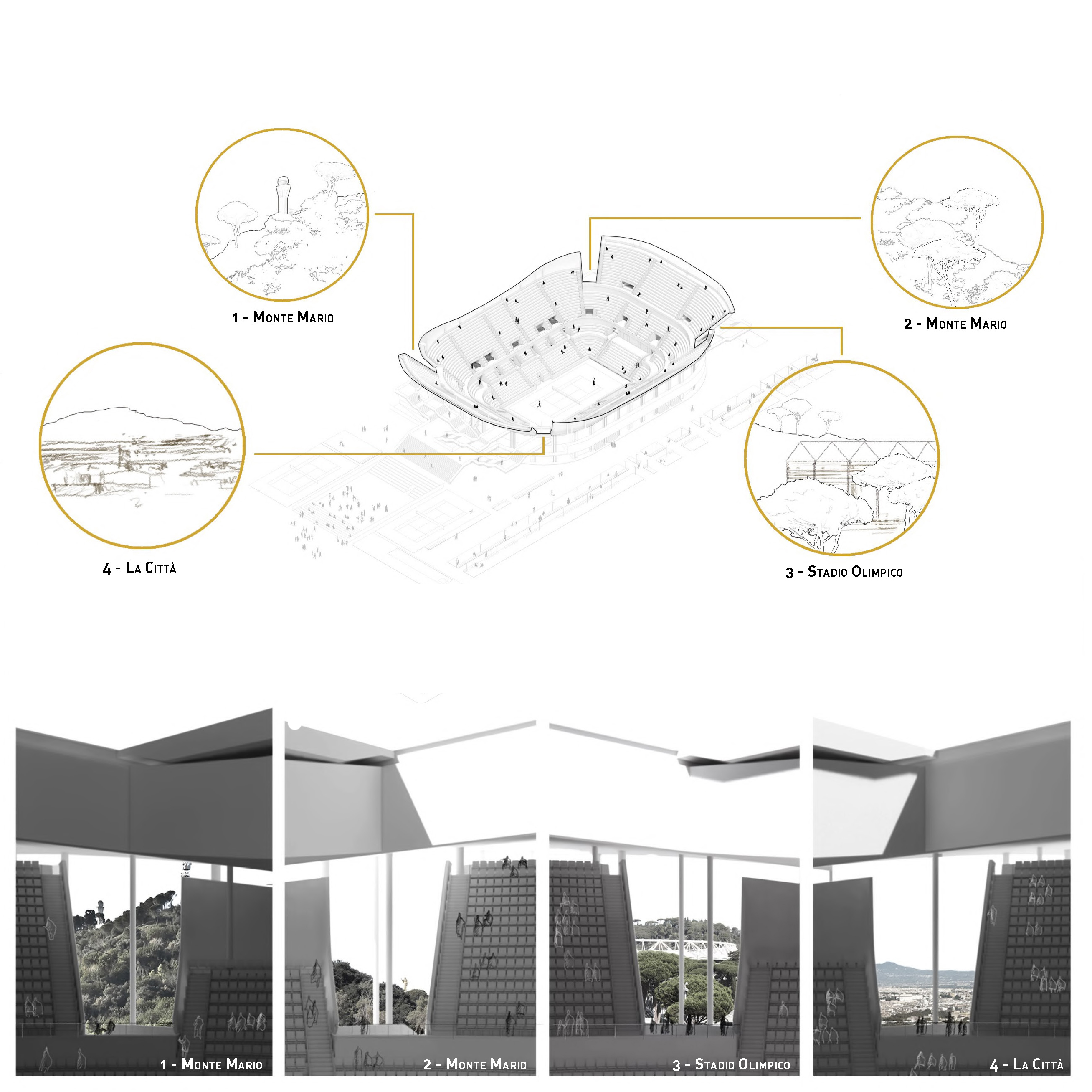 Among the elements that break with the geometric simplicity of the project, the large stairways, located in correspondence with the south and north ends of the stadium, play an important role in characterizing the new central tennis stadium.They are entrusted with the task of restoring a monumental aspect, so as to dialogue with the architecture of the Foro Italico, reinterpreting the materiality and the perception of lightness in a contemporary key. 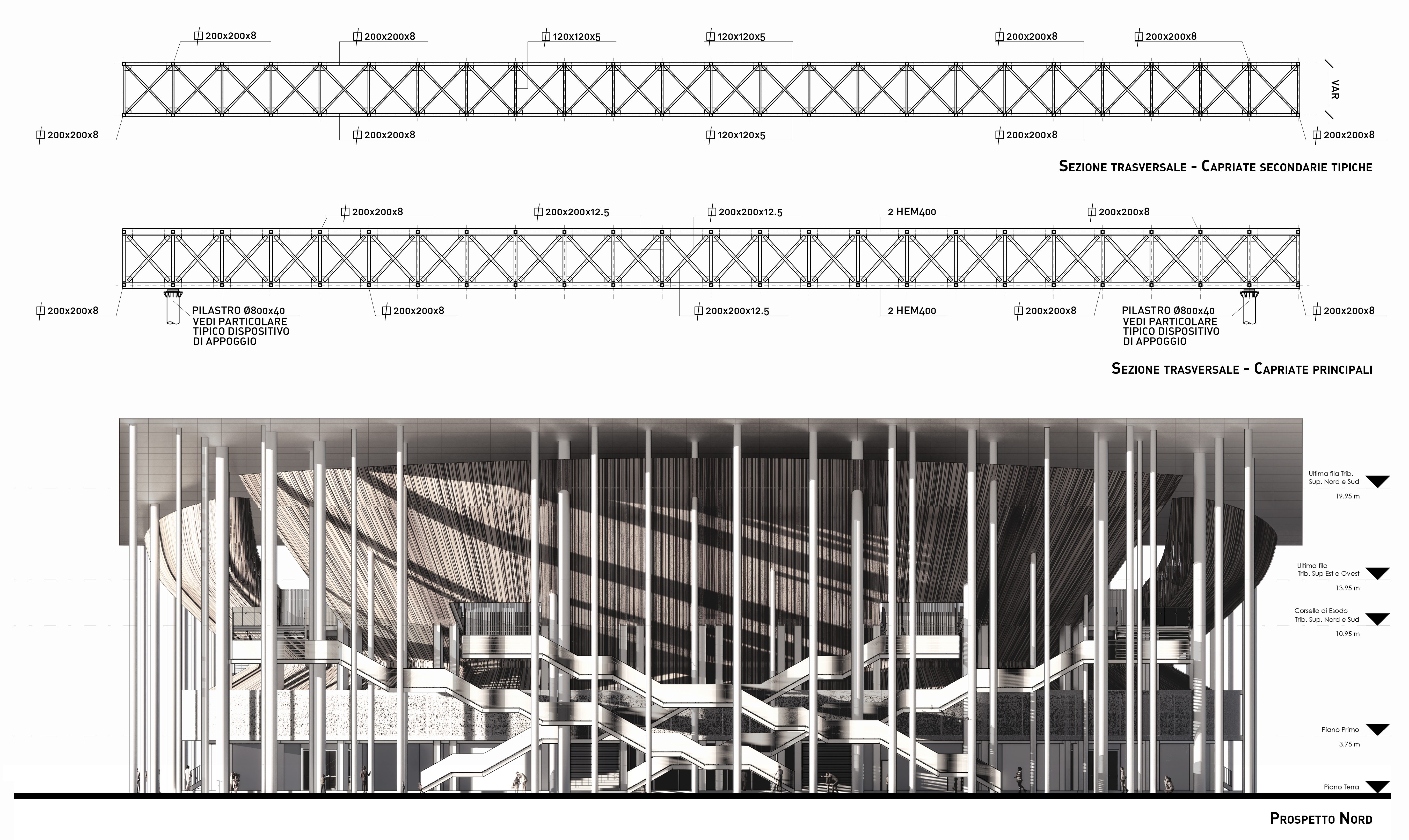 The need to ensure a greater number of emergency escape routes for fire regulations requirements are therefore enhanced and exalted. 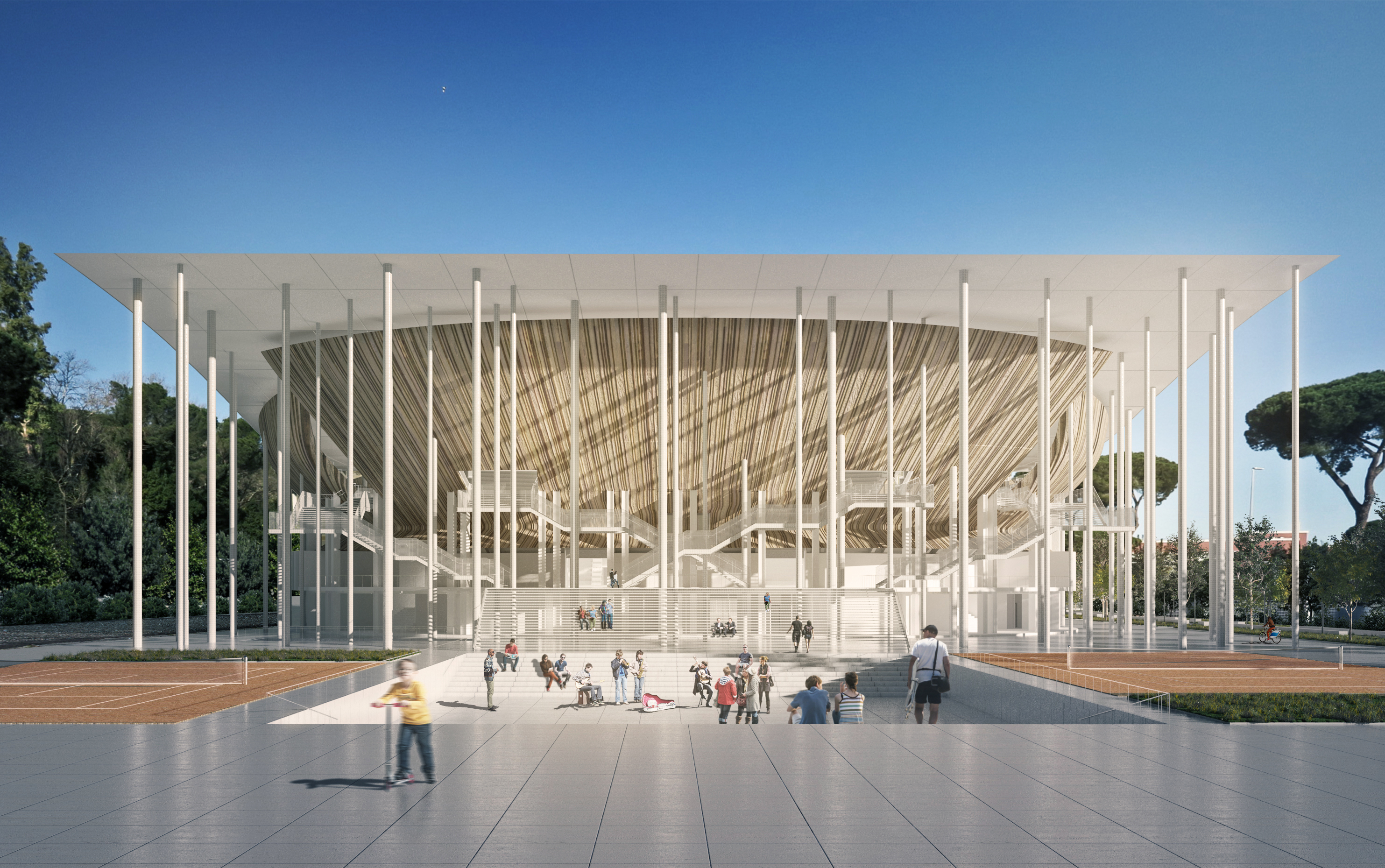 From an architectural point of view, another characterising element of the project is the solution proposed to enhance the grandstans of the stadium, in harmony with the naturalistic context of the Foro Italico park and the green background of the Monte Mario hill. The outer volume of the stadium stands is covered with an external skin that masks the structures of the stands.

This cladding is made with elements in resin and wood powder of different sections. 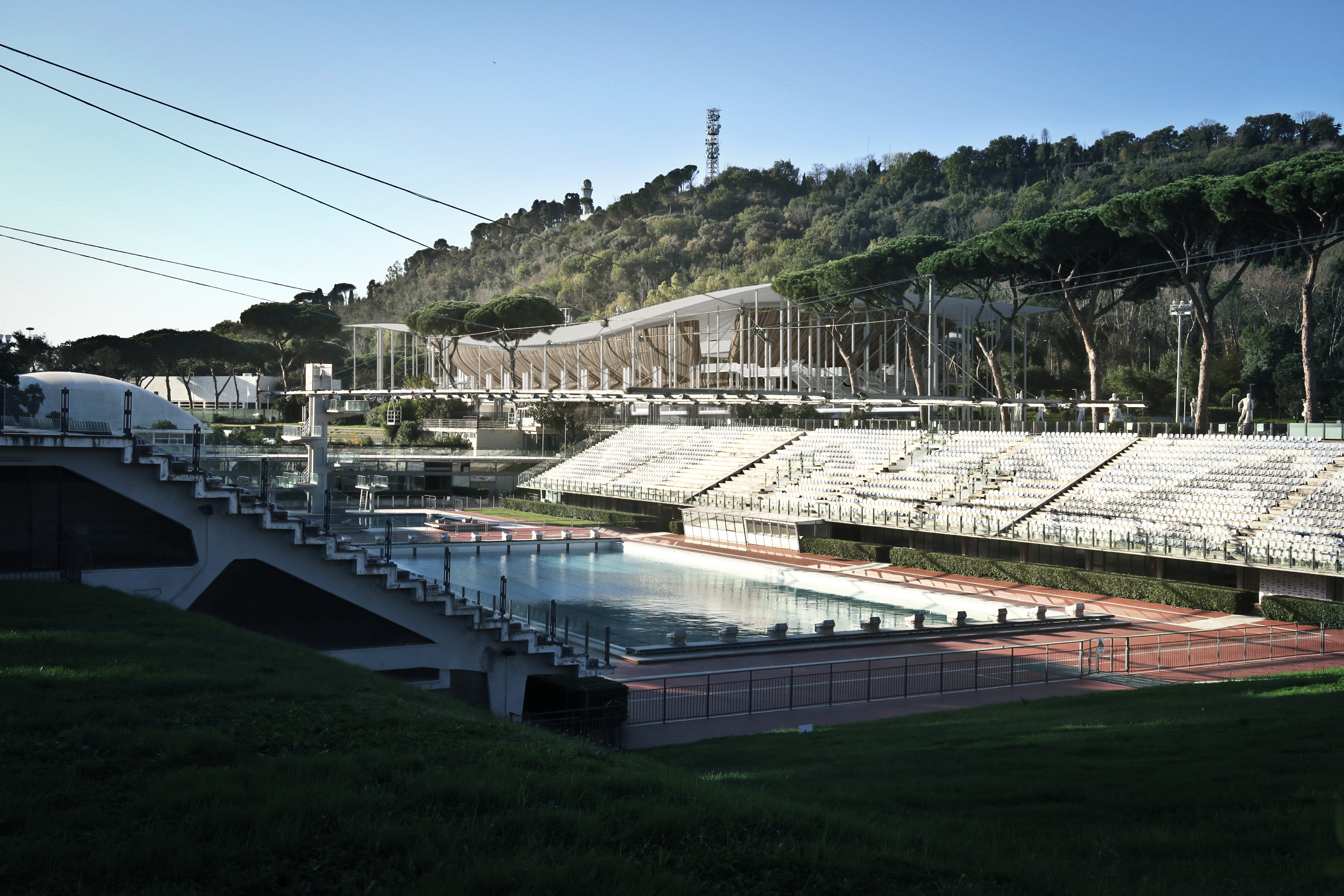 This solution also allows us to mask the plant engineering part. Both of the vertical and the horizontal section are curved, which creates a harmonious volume, ideally perceived as a large "basket of natural material". 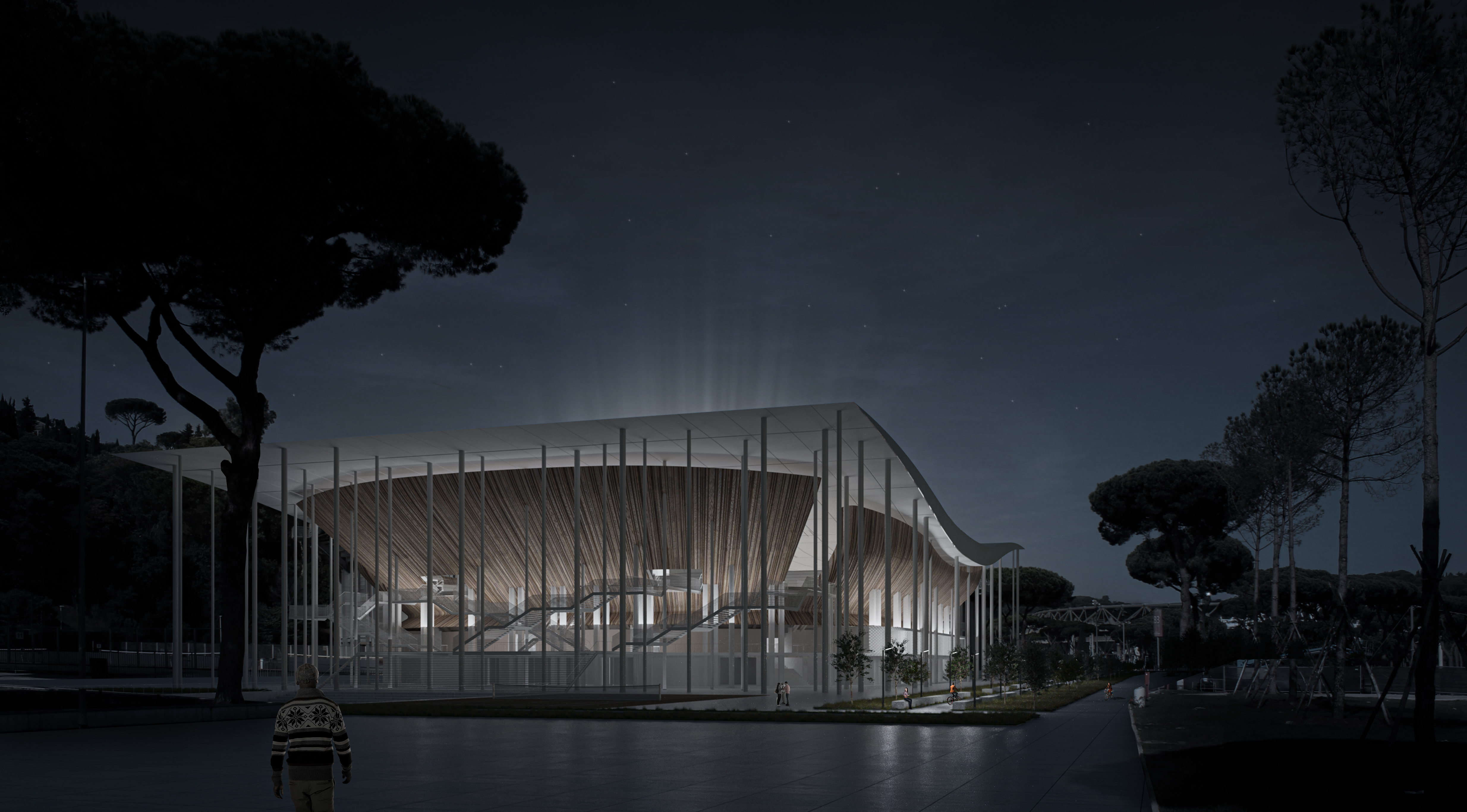 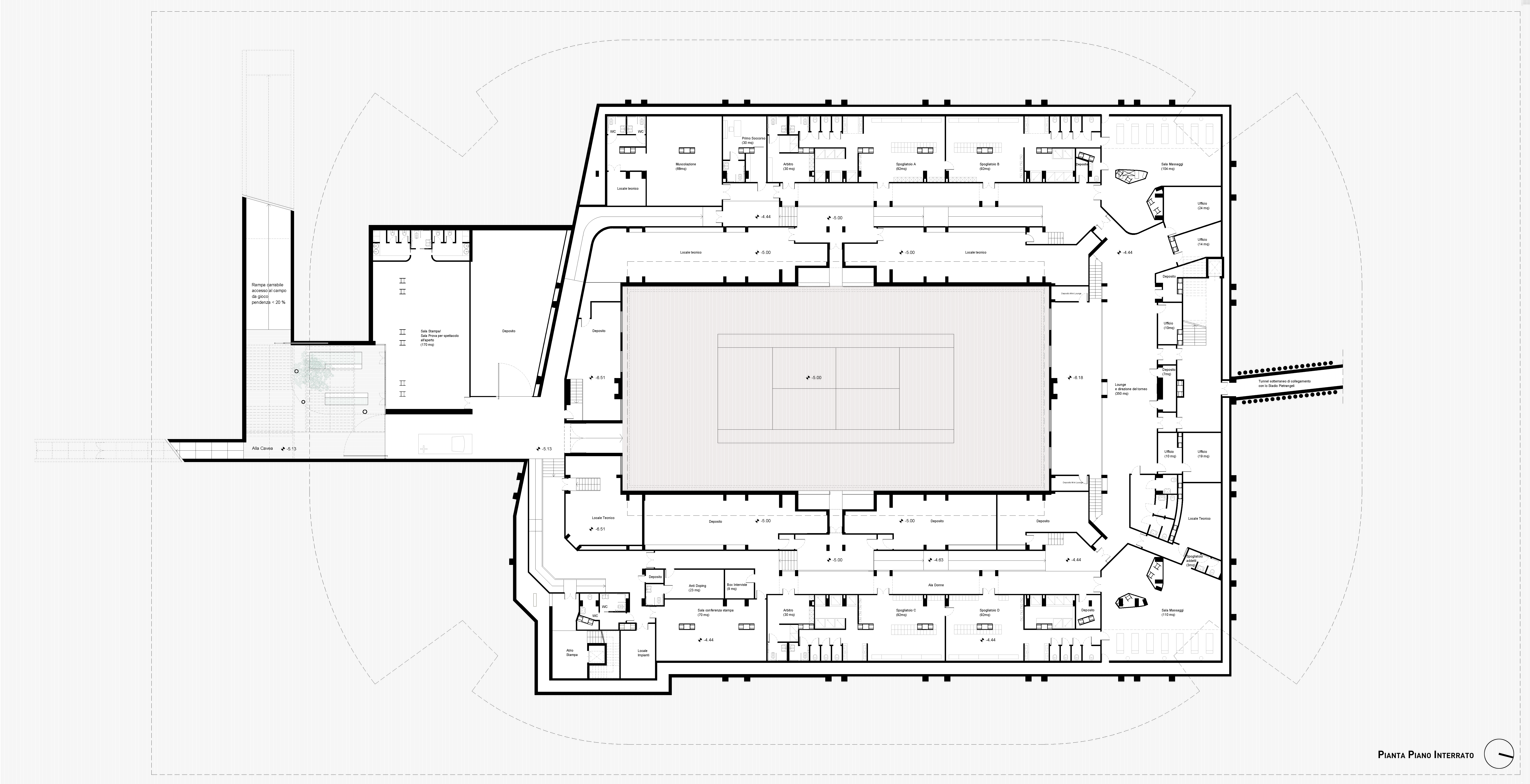 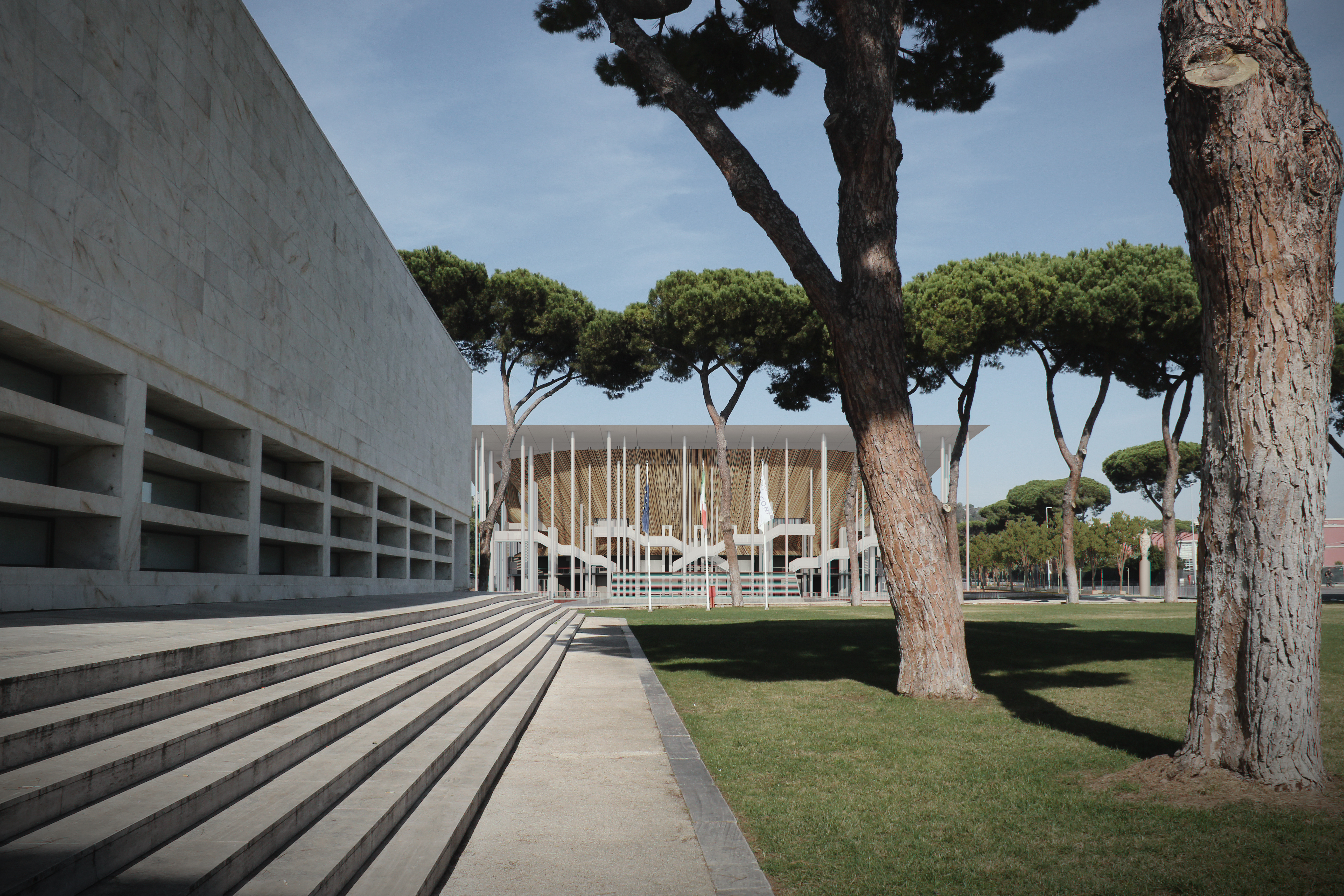